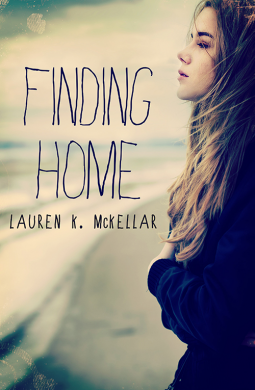 Synopsis from NetGalley: Moody, atmospheric, and just a little bit punk, Finding Home takes contemporary YA to a new level of grit…

When Amy’s mum dies, the last thing she expects is to be kicked off her dad’s music tour all the way to her Aunt Lou in a depressing hole of a seaside town. But it’s okay — Amy learned how to cope with the best, and soon finds a hard-drinking, party-loving crowd to help ease the pain.

The only solace is her music class, but even there she can’t seem to keep it together, sabotaging her grade and her one chance at a meaningful relationship. It takes a hard truth from her only friend before Amy realises that she has to come to terms with her past, before she destroys her future.

My Initial Thoughts/Rambling: First of all, it somehow slipped past me that this was an Australian author. So there was a bit of a shift I had to make with a few different terms, but after that it was smooth sailing. Like: apparently the legal drinking age is 18?

What did I think about the characters? Amy is one of those characters that simultaneously annoyed me, yet also broke my heart. At first she was just plain annoying, but once her background was established (living on the road with her rock star dad and alcoholic mother), some of her actions started to make sense. Right off the bat, I was yelling at her to stay away from Luke and realize how well-meaning Nick was. Her head-over-heels insta-love for Luke was grating, but in the end I found it was easy to forgive her. By the end of the book, I was so heartbroken for Amy, but really hopeful for healing and peace.

And then there’s Luke. He’s a class-A douche bag disguised as the bring-home-to-your-parents boy-next-door. At first I was fooled, but I figured him out a lot sooner than Amy. And then I sat by, shaking my head alongside Nick, as Amy spiraled down into his black hole of predatory douchebaggery (auto-correct is trying to tell me that it’s spelled debauchery, which in this case is another accurate term. But I really do mean douchebaggery). Emphasis on the predatory. People like Luke that exist in the real world are the reason Tumblr users get worked up.

As far as the remaining cast of characters, I do have one complaint: the parents were really lax. Sex, drugs, booze – free pass for all! I’m sure half of the situations in the book wouldn’t have happened if there was a bit more control.

And the concept and plot? Even though the book was really short, I thought everything developed pretty well. Amy’s story wasn’t revealed all at one time, but a little bit more and more during the pertinent situations that relate back to Amy’s experiences.

What about the writing style? There was a bit too much insta-love for my taste, but at least McKellar made a reasonable excuse for it. Amy’s personality was one that latches on in a second, so it did follow her characterization. Other than that, I don’t have any complaints.

Anything else you’d like to add? I gave this one a 3.5 because I didn’t love it, even though I can’t really pinpoint the reason why. It didn’t sparkle for me, but it was a solid read and one I’d recommend for sure.