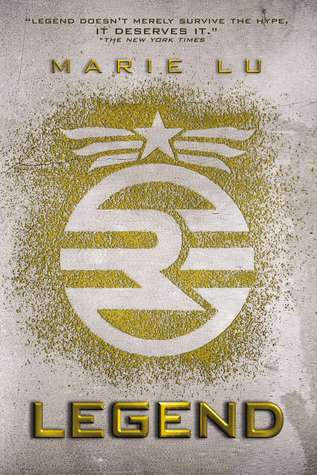 Synopsis from Goodreads: From different worlds, June and Day have no reason to cross paths…

Until June’s brother is murdered, and Day becomes the prime suspect.

In a shocking turn of events, the two uncover what has really brought them together, and the sinister lengths to which their country will go to keep its secrets.

I’ve heard mixed reviews about Legend before starting, but honestly I can’t see what everyone was talking about! I inhaled this book in one sitting – staying up till 1 am despite my 5:45 am wakeup time to finish it. Seriously, I could not put it down. And I was FREAKING OUT the whole time – gasping and screaming and hand flailing. The works. I was a mess. A total, complete, perfect mess. This is, without a doubt, a new favorite series of mine. Thank you SO MUCH to Veronica for letting me borrow it! And now I’m going to force her to finish it 😉

This was what I had heard was a weak point – the characters were flat and indistinguishable from each other. I didn’t see that at all!

June: At first I identified with June because of her academic excellence (with the test being similar to the SATs), but she quickly grew into something more than that. Between her drive to avenge Metias’s death, and her conflict after she meets Day, June was a complex and well-rounded character. Her growth was believable and dynamic, and I loved who she became by the end. And she wasn’t whiny!!! She took everything in stride, and instead of crying in a corner, she knew what she had to do, and moved forward with it.

Day: Where to start. I loved this character. I loved all these characters. I feel like I’m repeating myself here! But Day was the perfect compliment to June – his roguish behavior was the opposite of her military strictness, and they blended together so well to create a perfect team. And he was so charming and charismatic – once again, I have fallen in love with a fictional character. And despite his hard exterior, he has this lovely squishy inside that’s just heartbreaking and heartwarming at the same time.

Metias: Veronica warned me about him – but she didn’t warn me about the FEELS. Apparently I missed the part in the synopsis about his death though… I wish I had known that before I fell in love! This is when I knew that this book was great – I knew Metias for 25 pages, and when he died I literally cried. Hand over heart, mouth open, painful gasping. I kept thinking, he’s coming back, right? He’s not dead, it’s just pretend! (Once again: I’ve watched too much Supernatural.) I loved everything about Metias – his relationship with June, his dedication to his job, and his slight wry streak. He was as perfect as you can get.

Concept: You know, it’s nothing new. Corrupt government, military regiment, strict education, systems based on intelligence. I’ve read it before. But Marie blended them all together in a perfect way that it didn’t feel like a rerun – I was reading something entirely fresh and totally engaging!

Plot: Heart stopping. That’s the only way I can describe it! It was a whirlwind, a roller coaster ride, and I enjoyed every second of it. I caught some of the foreshadowing, but for most of it I kind of sat back and watched it unfold. And the big reveal??? HOLY CRAP BATMAN.

Like I said, totally engaging. And I usually don’t like split perspectives, but this was so well done. And I could tell the difference between June and Day without a problem – they think differently, and approach everything in their own methods. Very well done in their distinction!

READ THE BOOK. You will not regret it! I want to read the next book, Prodigy, but I’m going to wait until Champion comes out and then buy the boxed set next month. And I just found out that Marie Lu is going to be at an event in December that’s only two hours away from me – I’m totally planning on going if I have the day off from work!

Food For Thought (sound off in the comments!):

If you’ve read the book: