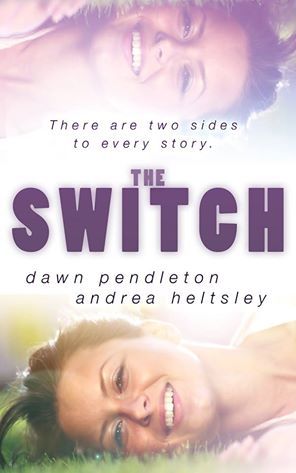 Synopsis from Goodreads: Honor and Faith haven’t switched places since they were kids. When Honor begs her twin sister to go on a date with her boyfriend, Cameron, Faith reluctantly agrees. The problem is that she lets things go too far. Now Honor and Cameron have broken up and he won’t stop calling Faith, claiming he felt something more for her. The scary thing is, Faith felt it too. The problem, however, is the one rule that sisters and best friends abide by: don’t date their exes.

Honor has her own problems. Breaking it off with Cameron was the right thing to do, but now his best friend, Parker, won’t leave her alone. The more time they spend together, the more Honor starts to heal. Suddenly, Honor sees Parker as more than just a friend who cares – and she wants more.

Neither sister wants to complicate things further and cross those boundaries, but they can’t stop their emotions for the guys in their lives. Turns out, the switch is the one thing that has changed them forever.

So after a deliciously long run of fantastic books, I crashed and burned with The Switch. I made it to 45% – five percent more than I had promised myself would. I like to keep my DNF standard at 40%, to give the book a fair chance, but honestly I was done with this one by page 20. The idea was great, and after I read another book with a similar concept, I had high hopes. But character angst, name-calling, and creepy dudes killed any good thing this book had to offer.

Disclaimer: I was given a copy of The Switch through NetGalley in exchange for an honest review.

I’m not going to break it down as usual, but rather discuss the characters as they all blend together a lot in the story.

First there’s Faith and Honor (cheesy names, first of all), the twins and the girls who switch places so that Honor can get out of a date with her boyfriend Cameron, who just so happens to be Faith’s object of lust. Shenanigans ensue, and Cam and Faith get together (no surprise there). A schism erupts in between the girls, and the rest of the book is spent with poorly-written snark, whiplash angst turning into love, and tears. It’s like they couldn’t decide how they felt about each other! Another thing: it’s like the twins were a separate whole of one person. Faith was the prep cheerleader, and Honor was the depressed goth. Can we please get a bit more original here? Not everyone is so polar, especially not twins. Also, I’m really confused – if Honor said it was okay for Faith to kiss Cameron to keep the ruse going, why did she go batty when Faith did that?

And then the boys: Cameron and Parker. Cam is a douchewaffle, and Parker is a creepy sociopath disguised as a “sweet protective jock”. It just makes me so sick to see his borderline-violent behavior romanticized and rationalized. Is this really what we want to teach girls – that it’s okay for a man to grab you so hard your arms bruise?? Long story short, I hated both of them, and that’s all I’m going to say.

Concept: Like I said – it had promise. I love Parent Trap type stuff, so I had hoped this one would be a cute read. No such luck, and it’s mostly because of the execution.

Plot: Directionless, in a word. And full of insta-love to boot. In all the pages I read, most of it was spent in one of three ways: 1) Faith/Honor are yelling at each other or crying buckets in their room, 2) on a date with their new BF, making horrid decisions and romanticizing sexist freaks, or 3) experiencing “typical” high school angst, like being hungover after a party or dealing with mean girls at school. Please… There is so much more to school than that.

My main issue here was how the characters spoke to each other: 15% of their vocabulary consisted of the words slut, whore, and bitch. I’m just going to leave this here:

Well, I didn’t like it. Any of it, to be honest. And I’m glad it was pretty short, so the 45% was only about 75 pages. There was just a lot that didn’t sit well with me, and the main idea of the story wasn’t enough to keep me reading.

Food for thought (sound off in the comments!)

If you’ve read the book:

9 thoughts on “Review: The Switch by Dawn Pendleton & Andrea Heltsley”