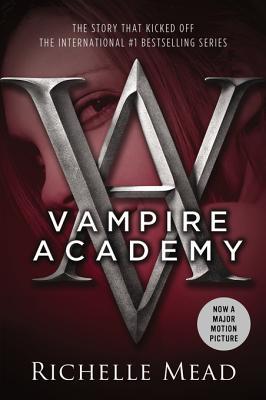 Synopsis from Goodreads: St. Vladimir’s Academy isn’t just any boarding school–it’s a hidden place where vampires are educated in the ways of magic and half-human teens train to protect them. Rose Hathaway is a Dhampir, a bodyguard for her best friend Lissa, a Moroi Vampire Princess. They’ve been on the run, but now they’re being dragged back to St. Vladimir’s–the very place where they’re most in danger.

Rose and Lissa become enmeshed in forbidden romance, the Academy’s ruthless social scene, and unspeakable nighttime rituals. But they must be careful lest the Strigoi–the world’s fiercest and most dangerous vampires–make Lissa one of them forever.

Vampire Academy blew me away with how unique and engaging it was. I was expecting cheesy romance and wannabe vampires, but instead I found more than just a love story and some vamps that are absolutely badass. Rose was perfectly snarky, yet also a well developed character. The pace and plot completely sucked me in, and I finished the book as quickly as I could. In the end, I was kicking myself for not reading this sooner, and putting up such a fit about the cover. Despite the cheesy name and awful original cover, the insides are what count – and this book is definitely worth a reread!

This review was supposed to be posted on Monday, but I was surprised at the last minute by my cousins and whisked away to Big Bear for a mini-vacation! It’s definitely what I needed – and I wasn’t going to ruin it by stressing out about writing a post! Thus, this review actually earns the honor of being the very first for this blog in 2014! And it also must be started with an apology:

Veronica, you were absolutely 100% right and I will forever listen to you and stop whining about covers because you know all and you are perfect and you are the best for buying this book for me even when I was dragging my heels and then letting me borrow the rest of the series and not turning off your phone when I text you at two in the morning crying because Dimitri and you are just a flawless human being.

I think that about covers it. And now to the review:

I shouldn’t have been such a snob about this cover. Let me explain myself: the original cover looks like it has Angelina Jolie on it – and I don’t like her so much. That’s about the only reason. So when Veronica dragged me to Barnes and Noble and bought me the version with the new cover (where Jolie look alike is barely there), I agreed to read it. AND OH MY GOD WHY DID I WAIT SO LONG??

In short, this book is my new guilty pleasure. It’s full of everything that usually makes me cringe – vampires, bad boarding school settings, cheesy titles, and overly rash protagonists. But this time it just worked. First of all: the vampires. Twilight forever scared me from vamps and the entire paranormal genre, but I’d say that VA has successfully convinced me that maybe there’s hope yet for the genre. Second: the boarding school. Other than HP, I haven’t found a book with this setting that I actually enjoy, but once again VA broke that rule! Maybe it’s because Rose was beating other people up for homework rather than talking about physics?

Speaking of Rose – loved her. She was sassy and snarky and 100% firecracker, and the best part was that she was unapologetic about it. She didn’t need approval – she was who she was and would break the femur of anyone who puts up a fuss. But in that, she’s flawed, and is far too rash and acts without thinking half the time. I think the greatest part of the book was seeing her try to grow through that. She didn’t do a complete change, since of course it’s a series and she can’t get it all done in one book, but there’s definitely some maturing going on. And I especially love how she and Lissa worked together – their bond was an interesting part of the book and a mystery that I enjoyed working out.

As for the guys (because of course while there are some kickass vamps and some awesome fight scenes and a mystery and murders and kidnappings and whatnot – we cannot forget the romance, or the hot dudes that go with it), I honestly could’t decide which I liked best. I think what sold me on the romance was that neither Rose nor her prospective partners were solely defined by their romance; they were still very unique in their own right. Between Dimitri, Mason, and Christian (who I add in because even though he’s not Rose’s love interest he certainly is mine), I just loved them all. But, I totally shipped Rose and Dimitri. Mason was a sweetheart, but there just wasn’t a spark. But Rose with Dimitri… now that’s chemistry. And Christian is just totally perfect and far too good for any of these girls. I’ll take him off their hands. For safekeeping only. Only pure intentions here.

Basically, I just really liked this story, okay? I could not stop flipping the pages. Could. Not. Stop. The pace is perfect, and everything develops SO WELL. So once again I apologize to Veronica, and to all the skeptics out there: