I was so worried I wouldn’t be able to make it to this event on the 17th, what with my car being out of commission, but my mom lent me her car and I’m BEYOND glad I was able to make it to the San Diego Library for the amazing night. My sister tagged along, which made the long drive much easier, and she was a great picture taker and book holder. Thank you Brooke!

Before I get to the actual event recap, I need to say one thing: I don’t think I hate libraries anymore. OH MY GOD this place was HUGE. I’ve said this before – I don’t live in a small town. We have stoplights, 5pm traffic, and nearly 80,000 people. But our one library isn’t even in my city, it’s the next one over, and it’s tiny. But this library was at least twice as big as mine, and three stories higher. Plus, they had bathroom sinks shaped like open books. How amazing is that?? So I think I’ve just been to the wrong libraries, not that I hate them.

So moving forward… we all were locked out until about 20 minutes before the event started, but finally the auditorium opened up and we all took our seats. “All” being a relative term – this was the smallest event I’ve been to. So few people showed up! But I did see a few familiar faces from the October event, even the couple that cosplayed Alina and Morozova’s Stag! So that was pretty cool. Soon enough all the authors filed in. *queue cheering* 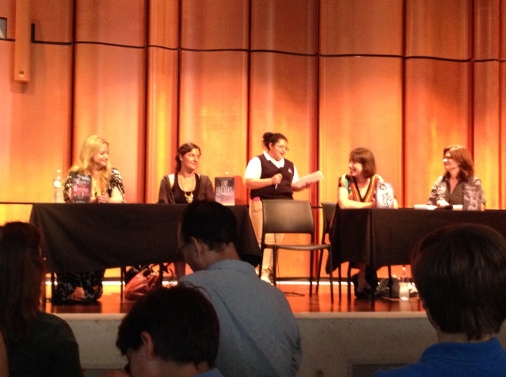 After a few opening announcements and whatnot, the moderator got right into some questions for the authors. I took copious notes, so hopefully this brings the event to you! It’s going to get long – not sorry. Quick note: Leigh wrote the Grisha trilogy, Ava wrote Love Letters to the Dead, Jennifer wrote The Truth About Alice, and Emmy wrote the Monument 14 trilogy.

Which of your characters do you most relate to?

Leigh – It changes depending on the scene and book, but in Ruin and Rising it was Zoya mostly.
Ava – Laurel, in personality and personal experiences
Jennifer – Kelsey and Kurt
Emmy – Dean and Josie

What are you currently reading?

L – Egg and Spoon by Gregory Maguire, and Red Fortress by Catherine Merridale
A – Monument 14 by Emmy Laybourne!
J – Counting by 7s by Holly Goldberg Sloan
E – The Graveyard Book by Neil Gaiman

Describe your main character in five words or less. 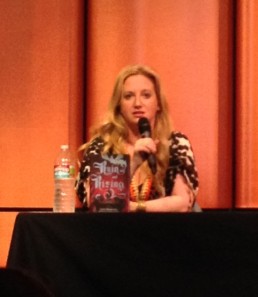 If you could be one character from any book from the four authors, who would you be?

What advice would you give to aspiring YA authors?

L – Your first book doesn’t have to be THE book. Write the crappy book first; just get something done. You may think you have that one good idea, but you have so many more, and you won’t get to them if you try to write a perfect first book.
A – Stephen Chbosky once told her, “You’re a writer if you write. If you write, you aren’t an ‘aspiring’ writer, you are a writer.”
J – Three things: 1) Read whatever you want for pleasure, and don’t feel guilty about what you read. 2) Put away your phone and spy on people. 3) Just write, even if it’s a tiny little thing. Just get it out.
E – Don’t judge your book while you’re writing it. It’s like pushing the gas and break pedals at the same time. Create first, and then go back to edit.

What makes you fierce?

L – Putting your work out in the world; people are mean!
E – Obviously the hair 😉 But really, the stories that they tell – they take you for a crazy ride.
J – Agreed with Emmy. 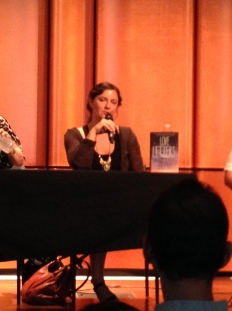 What was one of your favorite scenes to write? The hardest?

L – Funnest: the party scenes in Siege and Storm. Hardest: The mechanics of the beginning of Ruin and Rising, when so many people were talking at once.
A – Favorite: Laurel writes to Amelia Earhart on Halloween, and then later gets her first kiss. Hardest: the emotion of when Laurel’s secret is finally revealed.
J – Favorite: Kurt and Alice at Christmas. Hardest: the scene with Josh and Brandon in the car.
E – Funnest: the first scene of the first book, because she could just let go and run wild, since she didn’t even know she would be publishing it. (Fun fact: chapter one went through hardly any changes through the entire editing process) Hardest: the epilogue of book 3, just letting it all go.

After that, we moved on to the audience questions.

To Jennifer – How do you manage time between teaching and writing? She doesn’t sleep (slightly teasing – she’s got kids!), and she’s really organized about her time. She focuses on one thing at a time, and carves out time to make sure she can focus on each thing.

To Leigh – Can you tell us about the “despise your heart” quote? She was studying the Congo in college, and there was a similar phrase used. It means, do what you need to do, despite what your heart is telling you. (Note: I didn’t catch the whole answer, so I may be missing a detail or two).

To all the authors – Did you keep a journal when you were younger or even now? Leigh: from the time she was ten years old through college, but stopped afterwards. Only now when something is really emotional and she needs to work through it does she write it down. Ava: has a large collection from her childhood, where she copied down song lyrics and put bits of her own poetry in them. Jennifer: from 5th grade through high school; what she wrote about is a lot funnier than it was at that point in her life. Emmy: has a full shelf of old journals, and has a clause in her will where a close friend will be paid to edit and abridge them all to one day be passed on to her children.

To Leigh and Emmy – what are some tips for finishing a third book? Leigh: cut yourself some slack. It doesn’t get any easier, and third books are about closing doors rather than opening all of them. Laini Taylor once said that at some point you may fall out of love with your story and chase some shiny new idea. Find what is so appealing from that new idea, and write it into your book. Emmy: keep adding twists and turns. Your trilogy shouldn’t be like crossing one long bridge – there needs to be change and craziness. Look back at what you’ve written, and use that to spur your imagination.

To all the authors – how have personal experiences affected your writing? Leigh: she doesn’t realize it till after, but sometimes things sneak in that her friends point out. Ava: she lost her mom a few years before writing Love Letters, and the writing process helped her work through that. She also stole a lot of stories from her and her best friend’s memories. Jennifer: high school was difficult for her, and she always sat back observing the “Darwinian cafeteria” scene, and now writes about HS! Emmy: she’s never experienced something where she has to survive like her characters, but she hopes her humanity shines through.

To Leigh – The Dregs (omg so excited) is set in the Grishaverse, in Kerch; are there any chances of characters returning? She just sent in the first draft, and there are some references to characters from the first trilogy. We may potentially see them in the future. 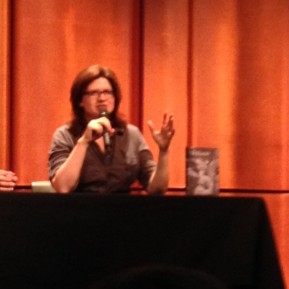 To all the authors – what was the most drastic thing you’ve done to meet a deadline? Leigh: she goes into a weird place where she will eat the same meal every morning, eats weird foods, and doesn’t leave the house for weeks. Ava: dreams about her characters (Leigh joined in and said that she once dreamed about being on an episode of Chopped in the Shadow Fold). Jennifer: is hyper-compliant about deadlines, and rewards herself every 10K words with frozen yogurt (smart woman!). Emmy: worked so hard on her computer that she had eye strain, so she started writing long hand, and ended up outsourcing the typing to a woman in the Philippines after scanning them all and sending them over (but she paid her $10 instead of $7 an hour!).

To all the authors – plotter or pantser? Leigh: she outlines extensively, using a screenplay structure; avoids word count tools; started using Scrivener for her new book because there are 5 POVs and plenty of flashbacks (eeee!!!). Ava: Her process was messy; she had the concepts and basics, but she spent a lot of time getting to know her characters. Jennifer: has a general plot, but then fills in the details as she goes. Emmy: outlines carefully, and actually wrote 150 pages of M14 before submitting it with a proposal for the rest of the book. Fun fact: 9 out of 10 said no! So don’t give up, because you only need that one yes.

To all the authors – what was your first piece of published material or something that inspired more? Leigh: she worked on a middle grade magazine with poetry. Ava: her first poem was published, then Love Letters. Jennifer: made her own newspapers and then in Cricket Magazine she had a story about a dancing gorilla in a library. Emmy: type out at 7 or 8 a story about an alien named Grog, who came to Earth with his wife. In their species, the female kills the male after mating, and the last sentence was “please help me before she eats m…”

So that was it for the panel! Quite a bunch of fun, wasn’t it?

Afterwards, we all filed outside to get our books signed and pictures taken. I nearly went to buy Monument 14, but restrained myself (barely – only thanks to Brooke or I would have bought a copy of Alice too). So I just went up and talked to Leigh, got my book signed, and then had the courage to actually ask for a picture! I was in a daze after that, and had totally meant to say hi to Jennifer, but completely walked off without another thought like an idiot. I guess I’m still working on that “level-headed” thing for author events. I’ll get there, someday.

So there you have it! That was my evening with my second Fierce Reads tour. I hope the new schedules come out soon for the summer and fall – I’ll definitely be attending more of these events!