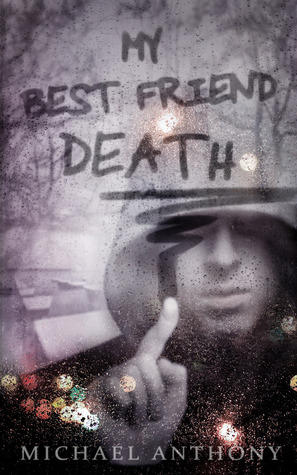 Title: My Best Friend Death
Author: Michael Anthony
Genre: YA, paranormal
Publisher/Publication Date: Self-published / June 5, 2014
How Did I Get It? NetGalley
Format? Ebook

Synopsis from Goodreads: Damien Crown devotes his life to being his brother’s superman. Like all heroes, he’s locked in a deadly war with a formidable foe—his brother’s depression. Instead of perishing in a climactic battle as comics suggest, he dies at the screech of tires and the blare of a car horn. But in those last precious moments, he regrets not taking off the cape and living his own life.

But those regrets don’t last long when Death becomes his life-coach.

Given a new body and one more year to live, Damien seizes the opportunity to reinvent himself. Forbidden by Death from making contact with his old family, he knows the trek will be hard, but he’s happy to leave behind the pressures of his old life.

Until his brother attempts suicide.

Now, the only way to save his brother is to break Death’s rules. But with a life any kid would kill for, Damien finds himself stuck between who he was, and who he wants to be. He can don his cape and die for his brother, or hang it up and finally live for himself.

*This book contains strong subject matter that may not be appropriate for some readers, including suicide, school violence, and teen alcohol and drug abuse.*

When I sat down to write this review, I actually couldn’t do it. So here’s try #2 – hopefully I can get all my thoughts out right. The easiest way for me to do this is split it between my objective view and my subjective view. Because objectively I’d rate this book two stars, but subjectively I give it one star. But I try not to have my personal issues and perspectives influence my reviews, so here’s both sides:

There were some really great points in this book, all relating to the friendships that Damien forms in this last year of his life. I enjoyed their times together, but other than that I had a hard time getting into the story. While the synopsis makes the book sound like it’ll be focused on Damien’s younger brother, the reality is that he’s only mentioned a few times, and only to incite more issues for Damien. Actually, most of the characters seemed to be pretty flat once I really looked at them, and were like pawns moved around to cause the most trouble for Damien. And that leads me to the plot – there seemed to be no rest or forward movement. Damien would learn something, and take page after page of “profound” thinking to sort it out.

After, though, there would be another problem thrown at him. And the whole cycle would repeat. By the end of the book, I actually found that Damien had a devolvement in his character – the whole book seemed pointless when I read that last line.

Subjectively, I had the same issues, plus 3 other personal problems (SPOILERS):

1) After the school shooting, Josh (Damien’s best friend) falls into a deep depression and turns to drinking to handle it all. He loved the boy that killed everyone, but nothing was even mentioned prior to that to even indicate that he may be gay. It was like the author simply needed a box to check to make the characters more diverse. Plus, when he spends 99% of his days completely drunk, his parents just say, “Oh, King [Damien’s new name], could you watch out for him?” WHERE WAS THE PARENTAL INVOLVEMENT?? Your kid just saw someone shoot up a school, then himself, now he’s plastered all the time and you just drive off to go see a movie? I have huge issues with that.

2) Damien’s whole intent for his last year is to have a better life – understandable, what with his dad being an emotionally abusive drunk. But his definition of a “better life” is to be as popular as he can be, get the hottest girl, smoke pot, and attend all the coolest parties. Where is the longevity in that thinking? It’s such a narrow scope of life that I immediately took a disliking to Damien. There is so much more to life, and I just couldn’t stand with the message that high school parties are the pinnacle of existence.

3) The ending, both with Taylor and the baby, and how Damien retaliates against Life. I had such high hopes – Damien finally understands that there is more to life, and is ready to be a father. And then Josh, in a drunken state – again, where is the parental responsibility? – rams his Jeep into their car coming home from the hospital, killing Taylor and the baby. Having lost everyone, Damien sets out on a vindictive rampage, and the final line is him walking up to Life’s wife (she isn’t supposed to know Life’s identity), and telling her, indirectly sentencing Life to death. It was a disappointing ending, to see Damien revert to an even worse person than he was before dying. And while part of me understands that there sometimes isn’t a happy ending, and that people are sometimes really sick human beings at their core, I just couldn’t stomach it. I had been ready to give it three stars until that final chapter, and then it all went down the drain. I shouldn’t finish a book and think, “why did I waste my time for all of that?” I really wish I could accept it a bit better, but personally I want to read books about people choosing to be better. Life is cruel enough as it is, and people are even crueler. I’d like a little escapism, please.