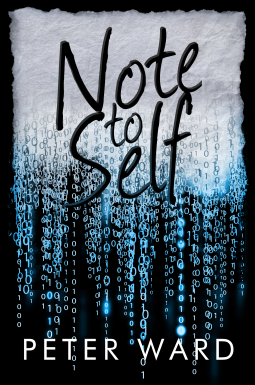 Synopsis from NetGalley: In a world where technology controls everything, sometimes your own handwriting is the only thing you can trust.

Richard Henley is an ordinary man leading an ordinary life, but when he finds strange notes in his own handwriting warning that someone is trying to kill him, he is sent on a journey to places he never knew existed. With an ominous and all-powerful organisation on his trail, his only hope is to trust unexpected allies, take control of his life, and uncover the truth about what happened to the girl he loved twenty years ago. A darkly humorous commentary on our app-obsessed culture, if Richard can stay alive, his world will never be the same again.

My Initial Thoughts/Rambling: Now that I actually look at the cover in a bit more detail, I realize that those dangly things aren’t the jangles you hang in your door way, but actually binary code. Now it makes a lot more sense – and the cover is a perfect representation of the core theme of the book! Possible Spoilers Ahead.

Disclaimer: I received a free copy of Note to Self from NetGalley in exchange for an honest review.

What did I think about the characters? This isn’t a YA book like I usually review, but rather told from the perspective of a middle-aged man. So that was a bit of a switch for me, and it made connecting to Richard a bit more difficult. Nevertheless, I found myself getting sucked into his story, and wondering what was going to happen to him next! He’s a solid blend of confused-man-thrown-into-wacky-situation and strong-character-who-takes-charge-in-wacky-situation, and turns out to be very well balanced and likeable.

Cassandra, another one of the characters, though secondary, was my favorite. She has the mouth of a sailor, knows how to drive a flying car, and is sassy as all get-out. My personal favorite line is one I can’t share due to huge spoiler reasons, but just know that she’s awesome.

And the concept and plot? The concept was great, if a bit mind-bending at first. Parallel worlds and quantum physics are still a bit hard for me to wrap my brain around – still haven’t watched enough Doctor Who to get it all. Some of the moral and ethical dilemmas brought up were great to consider for myself, and it made me think as to where I stood on the spectrum of agree/disagree with the statements the characters made. Plus, it really hit home with the idea that as a society we’re too plugged in to our tech and it could easily become a danger to us.

The plot was perfectly paced, up until the very end where I felt like it was wrapped up a bit too quickly. The dystopian elements of the book were great, but the “let’s overthrow the government” aspect was resolved within a few pages, so it was a bit of a let down in terms of suspense.

What about the writing style? This was what really sold the book for me. It was well written, descriptive without overdoing it, and engaging. And for a galley, well edited, which was a plus for me.

Anything else you’d like to add? Despite not having too much to complain about, I still give this one a 4 instead of a 5. For some reason, I just couldn’t get over that hump of really like to love. Maybe it’s because of Richard’s age? Nevertheless, I did enjoy this book for the incredible writing and themes.

Amazon: Not yet available

Barnes and Noble: Not yet available

Book Depository: Not yet available 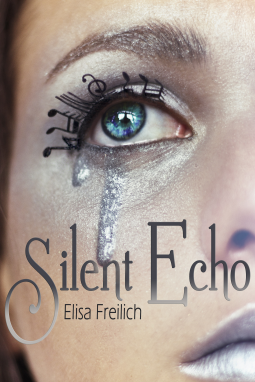 Synopsis from NetGalley: Haunted by silence, a mute teenage girl is mysteriously given back her voice … and it is divine.

Rendered mute at birth, Portia Griffin has been silent for 16 years. Music is her constant companion, along with Felix, her deaf best friend who couldn’t care less whether or not she can speak. If only he were as nonchalant about her newfound interest in the musically gifted Max Hunter.

But Portia’s silence is about to be broken with the abrupt discovery of her voice, unparalleled in its purity and the power it affords to control those around her. Able to persuade, seduce and destroy using only her voice, Portia embarks on a search for answers about who she really is, and what she is destined to do.

Inspired by Homer’s Odyssey, Silent Echo: A Siren’s Tale is an epic story filled with fantasy, romance and original music.

My Initial Thoughts/Rambling: This is bad, so bad. I’m having a serious crisis right now! I hate giving out bad reviews, and it’s even worse when I DNF a book. And this makes it two in one week that I gave up on. I did make it through a solid 1/3 of the book before giving up though, which makes it about 100 pages that I read.

Disclaimer: I was given a free ebook of Silent Echo from NetGalley in exchange for an honest review.

What did I think about the characters? All of them were cliche and stereotypical, at least to me. Portia and Max’s relationship was really hard to believe, and I’m not just saying that because I was vying for Felix and Portia to get together. Max was the tortured background/music guru sexy boy that every teenage girl is supposed to like, but I just couldn’t even begin to like his character at all. Felix was the only one I remotely liked, but then he turned into the “over protective and unnecessarily aggressive” trope.

And the concept and plot? Concept: It was great! I was 100% excited for this book –  you guys know how much I love Greek-based novels. But apparently I missed over the sentence in the synopsis where it says “her newfound interest in the musically gifted Max Hunter.” That should have tipped me off to the romance part of it all.

Plot: Great concept, poor delivery. Portia’s lack of a voice and sudden discovery that she has one takes a backseat to the romance with Max. And it’s not even a believable romance! One look, and they’re head over heels for each other. I don’t know how the story ended, but I know that the “fantasy” part of it was just a cart for the romance.

What about the writing style? Just weird… Nothing inherently bad about it, but Freilich kept interspersing her prose with clips of songs (and poorly written ones at that). They were really cheesy and what little suspension of belief I could have for everything went right out the window.

Anything else you’d like to add? I’m a horrible person. I might need to re-read Harry Potter to calm my distraught self. Two books DNFed in one week… The horror!